The name CRAC is a standard denomination defined by the ENTSO-E which means: Contingency list, Remedial Actions, and Additional constraints.

More concretely, it is an object which gathers data on:

It is typically used in European coordinated processes. It enables, for a given geographical region, to define which are the network elements that might be critical after which outages are they critical, and what are the remedial actions which might help to manage those critical elements.

A CRAC object model has been designed in FARAO in order to store all the aforementioned information. This page aims at presenting:

Note that other pages of this documentation describe how the FARAO CRAC object model can be built with other standard CRAC formats, such as the CORE Merged-CB CRAC format, the security limit format, or the CRAC CSE Format.

Example of complete CRACs are given below

The creation of a small CRAC is for instance made in this test class of farao-core repository: example on github

An example of a small CRAC in the json internal format of FARAO is given below: example on github

The following paragraphs of this page explain, step by step, the content of those examples.

Network elements are referenced in the CRAC with:

🔴⭐ an id
The id must match the id of a PowSyBl Identifiable object. When using a network element, the applications relying on the CRAC will look in the Network for an identifiable element with the very same id, if this element cannot be found it can cause an error of the application. When building the CRAC, one must therefore make sure than only the network elements whose id can be understood by the PowSyBl iidm Network are added to the CRAC. Note that some utility classes has been developped in order to ease the management of the network elements during the creation of a CRAC object.
⚪ a name
The name shouldn’t be absolutely required by the application relying on the CRAC object, but it could be usefull to make the CRAC or some logs easier to read from a business viewpoint.

The first method will be depicted in the following example of this page, but note that it can always be switched to the second one to define as well a name to the network element.

Network elements id are defined within the object that contains them. Examples are given later in this page, for contingencies, CNECs and remedial actions. Moreover, the internal Json CRAC format contains an index of network element names, in which, network elements which have a name are listed, with their name and their id.

A CRAC contains contingencies. ‘Contingency’ is the denomination which has been chosen within FARAO internal format, but contingencies are also commonly called ‘outages’, ‘CO’ for ‘Critical Outages’, or ‘N-k’.

A contingency is a probable event, whose consequences are putting at risk the grid, and which therefore must be envisaged when operating the system.

In FARAO, contingencies can be defined as below:

The instant is a hypothetical moment in the chronology of a contingency. Three instants currently exists in Farao:

💡 NOTE
Current limits on network elements are usually different in the outage and curative instants. The outage instant is supposed to be exceptional and not to last longer than a few minutes, it therefore allows to consider less restrictive temporary limits (TATL). On the contrary, the curative instant is supposed to be a lasting moment where the grid operation goes back to normal, and usually goes with more restrictive permanent limits (PATL).
Even though this PATL/TATL difference is commonly seen in the data of many processes, it is not set in stone, and the current limits can be defined freely in the CRAC of FARAO whatever the instant considered (see next section on CNECs).

Farao object model includes the notion of ‘state’. A state is either:

The scheme below illustrates these notions of instant and state. It highlights the combinatronics of the situations which can be described in a CRAC, with a base-case situation, but also variants of this situation occuring at different moment in time after different probable and hypothetical contingencies.

Instant and states are not directly added to a FARAO CRAC object model, but are indirectly part of several notions which are introduced in the following paragraphs of this page.

A CRAC contains CNECs. A CNEC stands for ‘Critical Network Element and Contingency’, it is also known under the name ‘CBCO’ for ‘Critical Branch and Critical Outage’.

A CNEC is a network element, which is considered at a given instant after a contingency. The contingency must be defined or omitted depending on the instant of the CNEC:

💡 NOTE
Note that in FARAO a CNEC is associated to only one instant and one contingency. This is not the case of every CRAC formats, for instance, in the CORE merged-CB CRAC format, the post-outage CNECs are implicitely defined for the two instants outage and curative, and in the security-limit format, a same CNEC can be defined for the preventive state and several contingencies.

A CNEC have an operator, which is the name of the TSO which operates the network element of the CNEC.

FARAO currently contains only one type of CNEC: the FlowCnec. It has the two following specificities:

FARAO makes a distinction between the CNEC - which is a generic notion - and the FlowCnec - which is one version (implementation) of this generic notion. The benefit of this distinction is for now not obvious, but it will become usefull when other types of CNECs will be handled by FARAO, such as CNECs which monitors the angle of a ‘Branch’, or the voltage of a terminal.

Flow limits on a FlowCnec 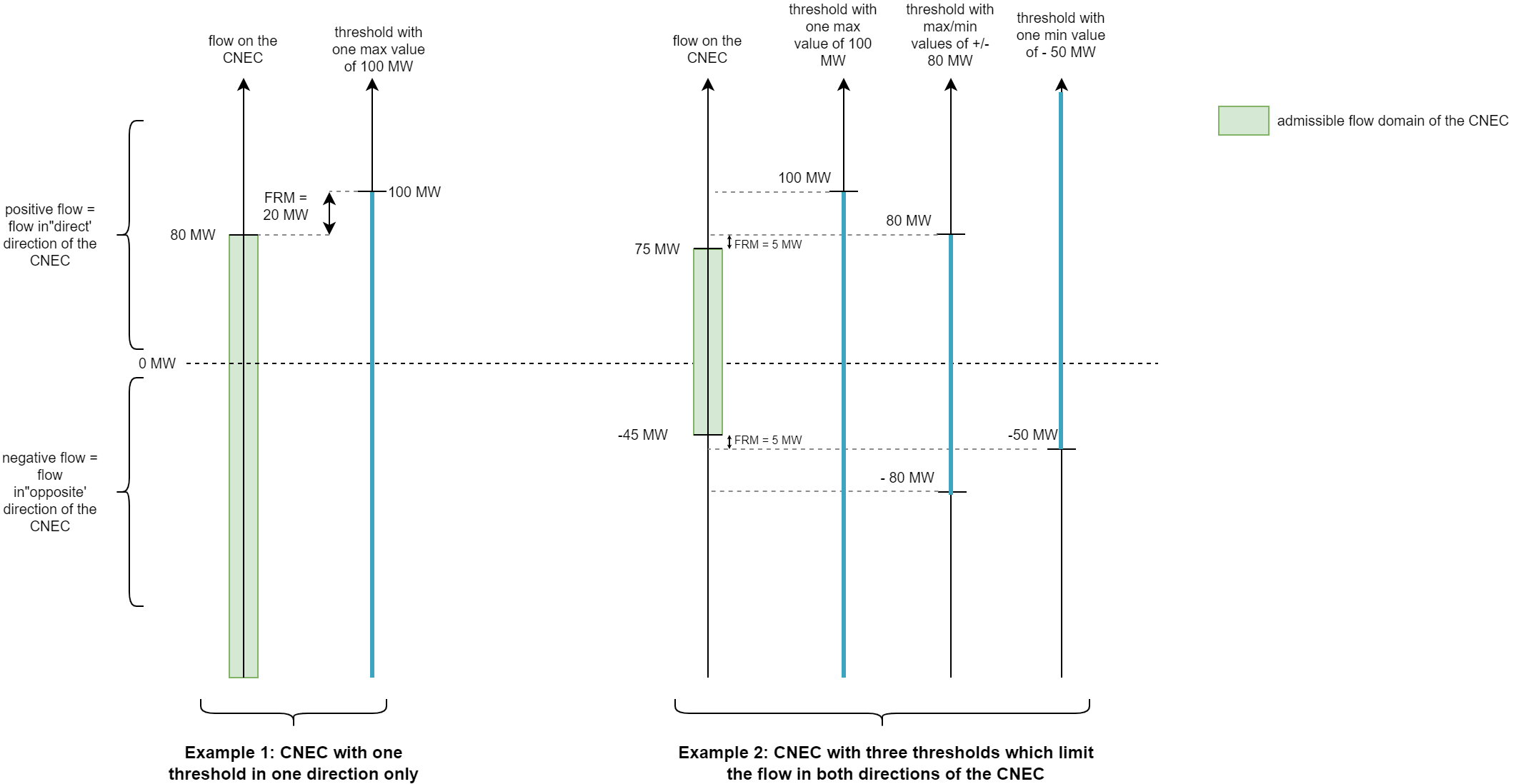 💡 NOTE
The side of the threshold is particularly crucial for thresholds:

Utility methods have been developped in FARAO to ease the management of the Imax and nominal voltage during the creation of FlowCnecs.

FlowCnecs can be monitored and/or optimised.

This notion of monitored/optimised has been introduced by the capacity calculation on the CORE region, and is inherent to the RAO of this region which:

In FARAO, FlowCnecs can be created by the java API, or written in the json CRAC internal format, as shown below:

A remedial action is an action on the network that is considered as able to reduce constraints on the CNECs.

The examples below are given for a Network Action, but the same methods exists for Range Actions.
Complete examples of Network and Range Action creation are given in the following paragraphs.

🔴 instant
🔴 usageMethod
🔴 contingency: must be the id of a contingency that exists in the CRAC

🔴 instant
🔴 flowCnecId: must be the id of a CNEC that exists in the CRAC

NB: A Network Action must contain at least on elementary action.

A PstRangeAction contains a network element which must point toward a PST of the iidm PowSyBl network model. The PstRangeAction will be able to modify the setpoint of this PST.

TapRanges can be of different types:

In that case, the validity domain of the PST (intersection of its ranges and feasible taps) is [1; 3] Note that the PstHelper utility class can ease the creation of the TapToAngleConversionMap.

An HvdcRangeAction contains a network element that must point towards an HvdcLine of the iidm PowSyBl network model. The HvdcRangeAction will be able to modify its setpoint, in MW.

HvdcRanges can only be absolute : the mix/max admissible setpoint of the HVDC. ⚠️ There isn’t any check performed to verify that an applied setpoint is between the ranges’ min and max.

An InjectionRangeAction modifies given generators’ & loads’ injection setpoints in a given range of a reference setpoint.

The impacted generators and loads each have a coefficient (“keys”) of impact applied on this reference setpoint.

This range action is mainly used to represent an HVDC line in AC equivalent model (where the line is disconnected and replaced by two injections, one on each side of the line, with opposite keys of 1 and -1).